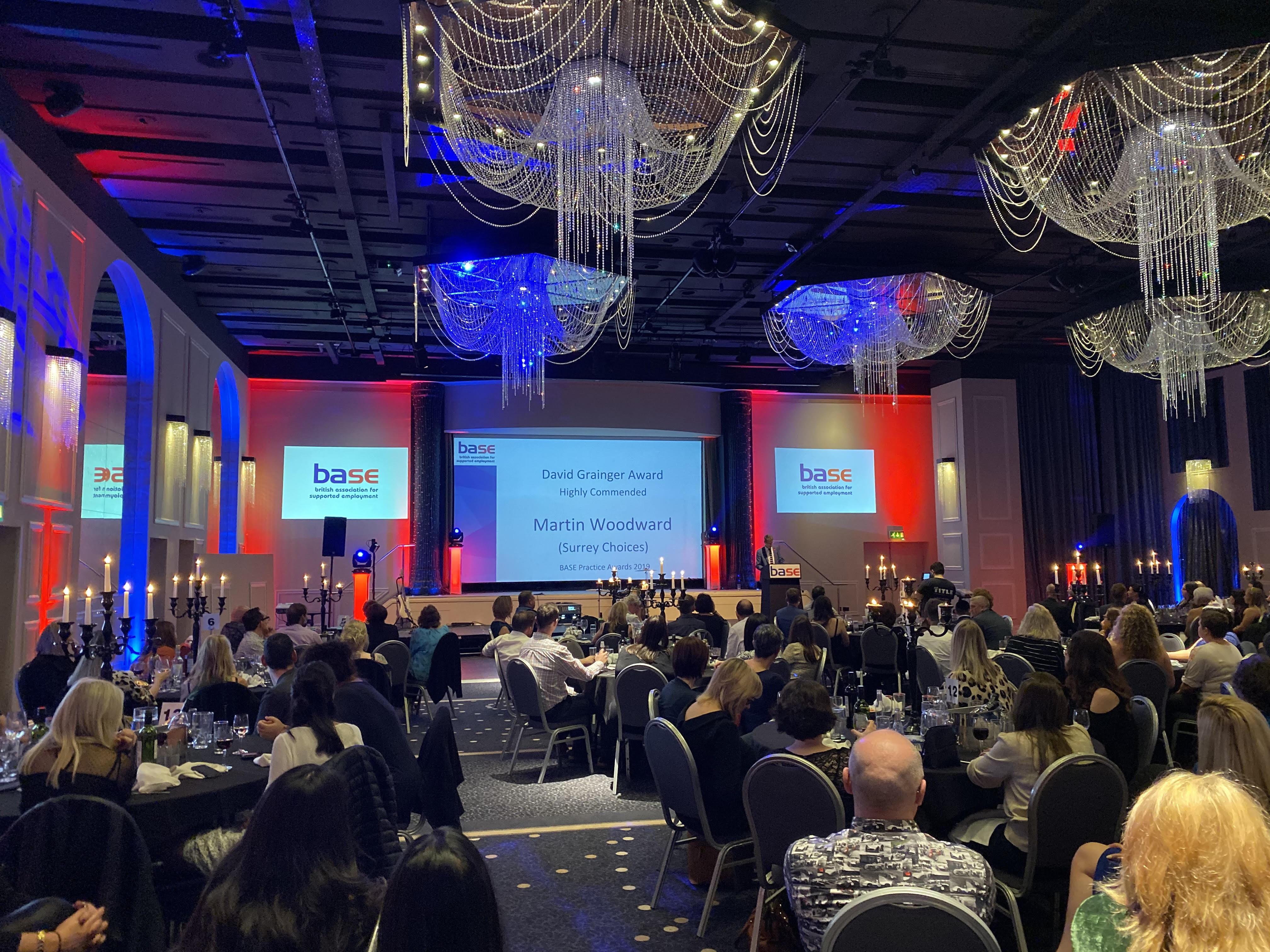 This year, the annual British Association for Supported Employment (BASE) Conference was held in Manchester from Tuesday 5 – Wednesday 6 November. Some of our colleagues attended and a very special award was highly commended by our colleague Martin Woodward, EmployAbility Team Administrator.

Although Martin was not at the event, he was highly commended the David Grainger Award. This is for a disabled person who have had an amazing journey and developed a career. In support of his application written in secret by Christina Earl Senior Operations Manager at Surrey Choices, several of his colleagues and also people he works with at National Autistic Society and Surrey County Council Commissioners wrote a statement of why he should win this award. Below is also the nomination text which was read on the night at BASE Conference. Huw, the chair of BASE said he had always found Martin to be so helpful and was delighted to get the nomination.

Martin is the team administrator for a team of around 25 peripatetic, unpredictable and busy employment support specialists! It is not a natural working environment for many autistic people and one that Martin has played a key role for nearly 9 years and been an exemplary employee. The reason I have chosen this year to nominate is he is now taking on new responsibilities for development of our own in-house IT system for the whole organisation 3 days per week. He will be doing this in conjunction with an IT lead but is a system designed to manage all services for a multi-million pound organisation. It is a great progression for his career, but he is also keen to keep a hand in with EmployAbility as he has a passion for supporting other autistic people to find their niche in the workplace, as it has really changed his life.

Martin initially referred himself on a short term employment project designed to support autistic people to find work. He was very quiet, shy and anxious. The timing was good as our current admin had just left and he did some work experience with our team. It was tough for him, as working even part time hours, left him exhausted and for the first few years he had little social life as work took so much of his energy. He was also involved in an advocacy group for autistic people and played a key role in encouraging them to think about work.

Although his official title is Team Administrator he has tried most roles in our team as he will volunteer to help out anyone when it gets busy. He has supported people doing job coaching, helped at job clubs, developed IT reports for our performance monitoring (improving the process from 5 days to 3 hours work each month), trained employers in autism awareness, trained JCP staff across the county in autism, been an autism champion and is co-chair of our autism partnership board employment subgroup.

He is still quiet but reflective, thoughtful, intelligent and always has time for everyone. However busy he is he puts people first be it an anxious parent on the phone concerned their son will never find work, or a team member who can’t get their laptop working. His work is of a high quality and ranges from finance and IT to telephone support and training. One of his real strengths is as a role model for other autistic people to see what can be achieved. Sometimes people say they can’t believe he is autistic, but he wants people to understand however “normal” he seems, he is autistic and it is not easy for him as he has to work on his behaviours everyday to understand people, situations and what is appropriate.

Martin had no idea he had been put forward for an award! Martin told us:

That’s not really what I was expecting on a Wednesday morning! It’s a complete surprise and I had no idea Christina had put in a nomination for me, although perhaps I should know her better by now!
It’s a great feeling to be recognised by a national organisation like BASE, although I’m probably glad I was spared a short notice trip up to Manchester – not something any autistic person would relish. It’s also good to see EmployAbility and Surrey Choices continuing to get recognised at the conference year after year with the awards for Carolyn and Angie and the Team award a few years back.