Surrey Choices Camberley Community Group joined Postcards of Kindness back in September 2019 when it was discovered on Facebook, writing to elderly, lonely and disabled people all over the country has transformed the lives of everyone involved.

The Camberley Community Group initially joined the project out of curiosity to see what would happen and they added their address to a list of names in the Facebook group. Within a few days they had received multiple postcards from a wide range of people.

They worked on just writing out postcards about anything they fancied. Then over time and with more experience, they began concentrating on the art of penmanship and are working towards more structured postcards. Some of the people supported at Camberley Community Group chose to write and some chose to draw. Some talk about what they have done in sessions at Surrey Choices and others like to discuss things they are interested in.

They have also recently worked on researching where their regular penpals come from and send the information to them. They have even developed a secret code and have sent messages containing information about their favourite films in this code. Another new style of postcards they have been working on includes a ‘Getting to know you’ questionnaire to build up relationships.

They decided to reply to the people who had given back addresses and sent out a bulk amount of cards to a select number of care homes from the list. As of March 2020, Camberley Community Group have 13 individuals they write to frequently who are all over the country including:

They also write to a range of community services around the county, who support adults with learning disabilities, are a care home, support people with dementia, offer shorts breaks respite services and more.

Some of their penpals have told us what receiving these postcards means to them:

The group recently wrote to the Queen expressing concern over her recent worries around Harry and Meghan and invited her for a cup of tea and some cake. Buckingham Palace responded to their letter which you can see below! 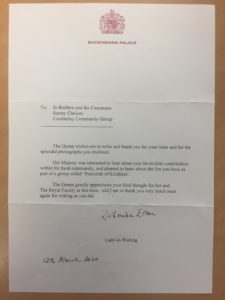