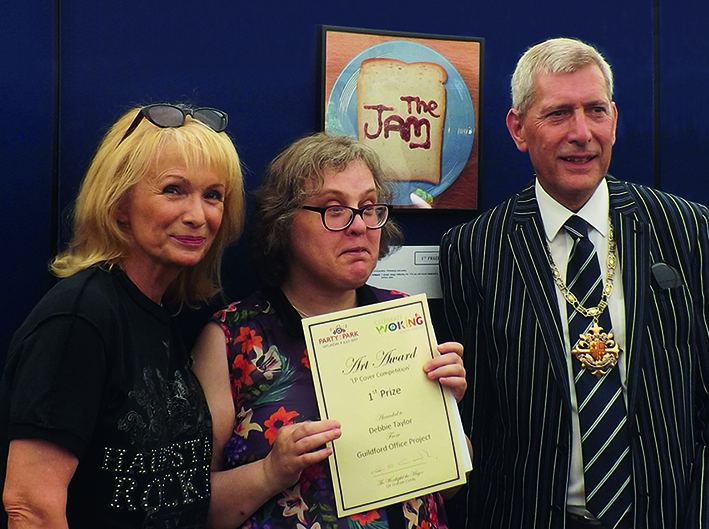 A Surrey Choices customer has won a competition to design an album cover after her work was displayed at Woking’s annual ‘Party in the Park’ event recently.

Broadcaster Mike Read and Patty Parfitt, former wife of the late Status Quo frontman Rick Parfitt, announced Debbie Taylor as the overall winner, rewarding her with £100 worth of Hobbycraft vouchers for her winning ‘Jam on Bread’ artwork.

Debbie, who attends Surrey Choices’ Guildford Office Project at Lockwood Activity Centre, was one of a selection of Surrey Choices customers praised for their artwork, including Rona Rapley and Tammy Wickenden who were also in the “Highly Commended” Top 10.

Sixty-five pieces of artwork were entered in to the competition overall from seven schools and community groups, with the brief being to design an album cover that captured the essence of either Status Quo or The Jam.

Amy Amber, Senior Activity Facilitator at Guildford Office Project, commented: “Our customers were so excited to have their artwork on display at a local event. It’s fantastic that they’ve been given the opportunity to showcase their talents and be rewarded for the hard work that they’ve put in over the last few months. Debbie in particular was really thrilled to win first prize, it’s a huge achievement!”

The pieces were on display at a free pop up exhibition at Woking’s annual Party in the Park event on Saturday 8 July 2017. The 60s and 70s theme was chosen in honour of Rick Parfitt from Status Quo who passed away at the end of last year, and world famous band, The Jam, in celebration of the 40th anniversary since the release of their first album.

The Guildford Office Project is part of Surrey Choices and hosts a wide range of vocational projects, enabling adults with support needs or disabilities to gain independence and learn vocational skills that will help them find paid or voluntary work. Courses on offer include I.T., Office Skills, Health and Safety, Graphic Design and Photography. The team also carries out jobs for local businesses, such as the design and printing of business cards, flyers and posters, preparing newsletters for mail drops, and much more.

To find out more about the vocational projects available at Surrey Choices, email info@surreychoices.com or call 01483 806806.